Nissan Silvia is a Nissan sports coupe with a history of 7 generations sold from 1965 to 2002. Developed as a specialty car for young people, it is a commercially successful model as a date car.
In addition, the Silvia is a "FR sports car" that was gradually decreasing in the 1980s, and because it is relatively affordable and easy to tune, it has gained popularity among street racer as a drift car. Recently, the image of a drift car seems to be strong.

The origin of the car name is "the name of a beautiful and neat maiden" that appears in Greek mythology. The etymology is Latin, which means "forest".

The first Silvia was born in 1965 as a luxury coupe with a beautiful seamless exterior called the Crisp Cut. It was a two-door coupe and two-seater, using the same chassis as the Fairlady (SP310). 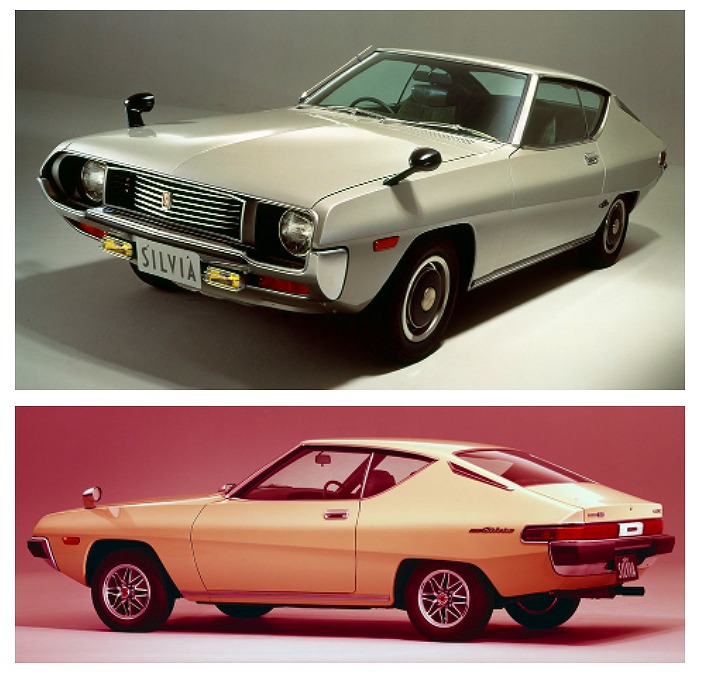 The second generation Silvia changed the concept to a secretary car for North America and appeared with the "NEW Silvia" emblem. The platform is the same as Sunny, and it has a seating capacity of 5 people, and the design is a North American style, which is very different from the first generation, and it was not very popular in Japan. 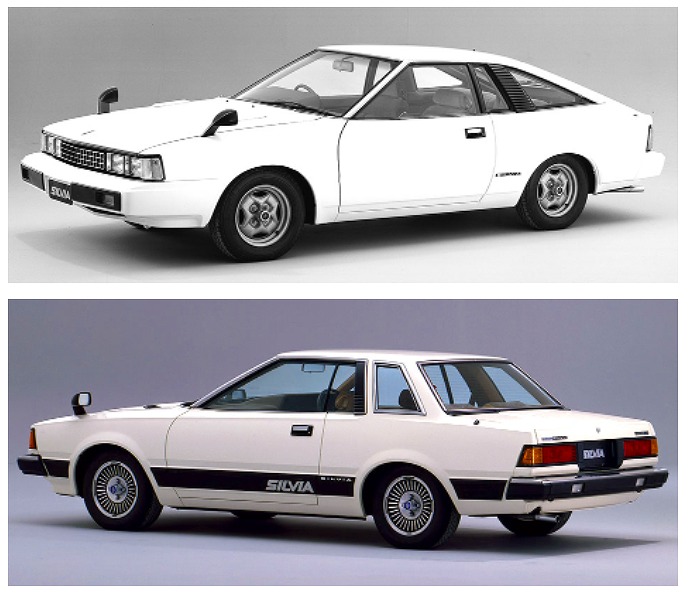 The third generation was released in 1979, and the engine was released in two grades, one with the 1800cc Z18 type and the other with the 2000cc Z20 type, and the one equipped with the FJ20E type was released with a later minor change. Two types of bodies were prepared, a 2-door coupe and a 3-door hatchback, and the sister car Gazelle was sold from this model to the S12 type model.
The convertible car that Yujiro Ishihara was riding in the drama "Seibu Keisatsu" is based on this Gazelle. 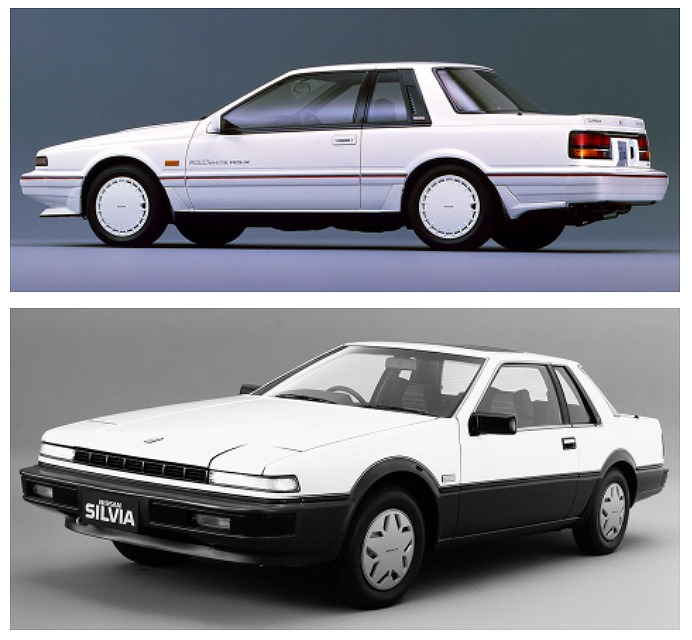 The 4th generation S12 type was released in 1983 and adopted retractable headlights, and the design changed drastically. The chassis has also changed from violet to bluebird, and operability has also been improved. 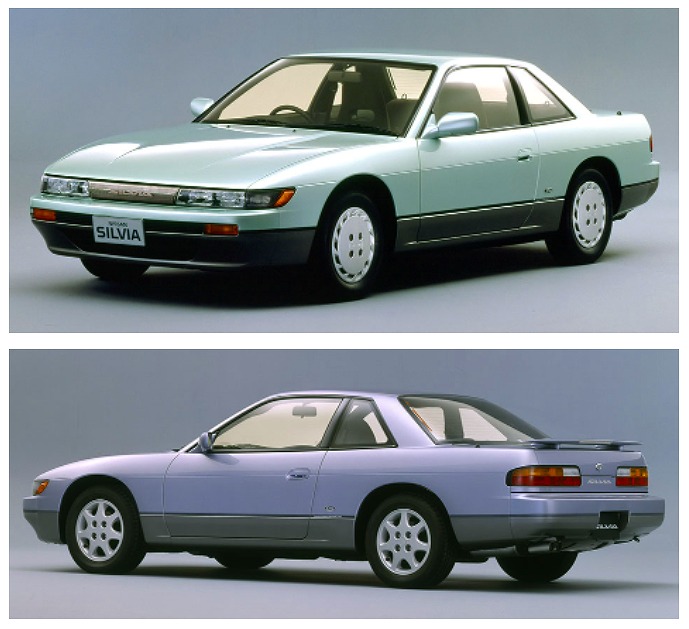 The 5th generation S13 model was released in 1988 and became the model with the highest sales volume in the history of Silvia. It attracted attention because it was released as a FR 2-door coupe at the time of the heyday of FF.
The engine was originally CA18DE, but it was changed to SR20DE2 with a minor change later. Both engines also had models with turbochargers. In addition, the body has been unified into a 2-door coupe, and the 3-door hatchback has been abolished.
In addition, as the catch phrase "ART FORCE SILVIA" shows, this S13 type design was highly evaluated and won the Good Design Award. 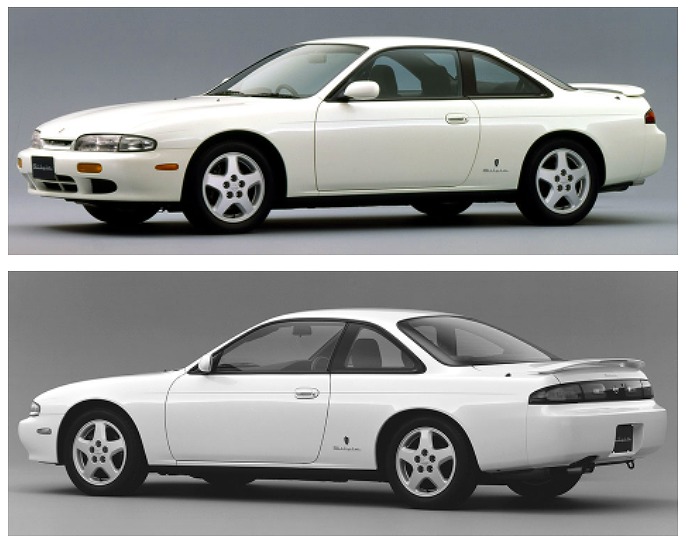 The 6th generation S14 type was released in 1993, but it was not very popular because it was bloated to 3 number size and its round appearance design was unpopular. 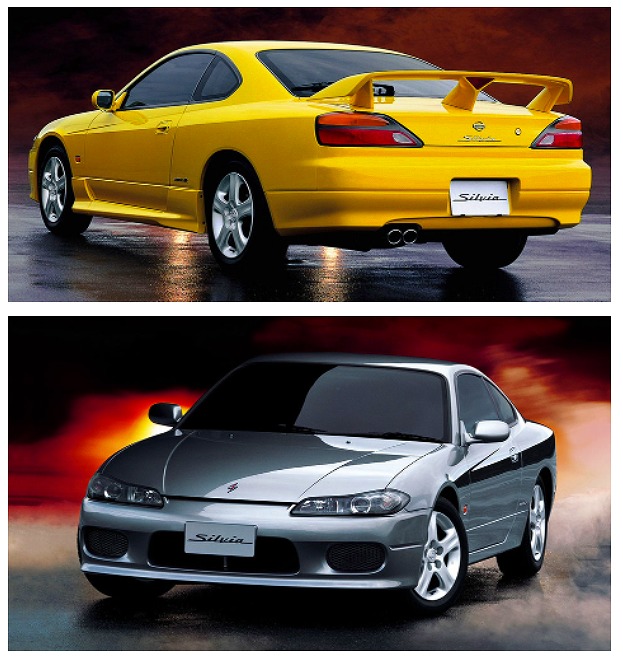 The 7th generation S15 type was released in 1999. In this model, the large body size that was unpopular in the 6th generation was returned to the 5 number size, and a 6-speed MT mission was installed.
It was unusual to make the car body smaller at that time.
The engine was the same SR20DE2 as the S14, but the specs were even stronger than the S14's. Unfortunately, the demand for the 2-door coupe has decreased and it was discontinued in 2002.


The Silvia was a 2-door coupe until the end. I would like to drive it if I have a chance.